I know, I know, it seems like we’ve become the East Coast version of Seattle, but as the lyrics from one of my favorite musicals (Bye Bye Birdie) states: 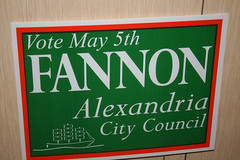 Tuesday, the dynamics of the City started to change. As I pointed out to you earlier, I saw a lot of households displaying different party signs during the campaign season. Tuesdays election changed the way the City operates. No longer will the Democrats have a united Council. Republican Frank Fannon handily won a spot on the City Council as did the Independent Alicia Hughes, a Republican-backed candidate, breaking up the three-year dominance of Democrats at City Hall.The Democrats so smug, so sure of victory Tuesday, that they voted to raise our taxes during a recession. I guess it didn’t work out as they planned.

Former Mayor Kerry Donley also won a spot on City Council, so the old saying there is that the more things change, the more they stay the same. Current incumbents Tim Lovain and Justin Wilson were not reelected. Althought I did not agree with their policies and beliefs, I personnally liked both of them.

Mayor William D. Euille was also victorious. I always find it amusing how the Mayor, although unopposed, never gets the full amount of the votes. For example this year, 14,410 voters (15% of the electorate) voted yet the Mayor only received 10,097 votes.

Did you vote? What are your thoughts on Tuesday’s election??

Pre-election, I also saw GOP candidate yard signs in yards that before held Dem yard signs. I gave up on the current city council members a couple of years back after they gave lip service to reducing my real estate taxes, that tripled since 2002, but either kept them static at a high rate, or this year raised them again with the tax rate increse. The city was able to live just fine to 2002 with far less real estate tax revenue, and can again do this by cutting back, and bringing efficiency to govt., not to mention cutting the… Read more »

Study: Maryland has Some of the Worst Drivers in the USA

Information for Candidates for Local Elected Office in Alexandria