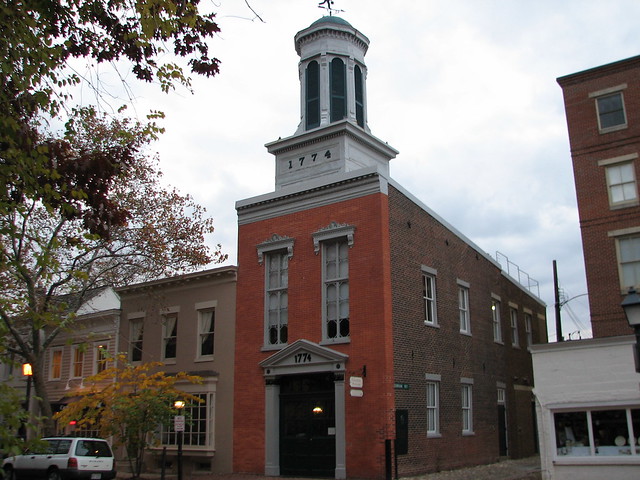 The Friendship Firehouse Museum is free for fathers and their families on Father’s Day. The firehouse photographer will be on duty, so dads can take home a complimentary photograph. Come have a family portrait taken alongside the historic equipment that fought fires in early 19th– century Alexandria. See the locally-made hose reel, and find out about artifacts such as hose buckets and axes. Youngsters will also receive a fire hat of their very own.

The Friendship Fire Company, established in 1774, was the first fire company in Alexandria. Friendship members were volunteers – motivated by their concern for the property and well-being of the community.

Today the Friendship Firehouse, built in 1855, is a museum open to the public. Buckets, hose, axes, and Friendship’s mid-19th century suction engine – elaborately decorated with the company’s clasped-hands insignia – are on view. Visitors also see their ornate hose reel carriage that was made in Alexandria, and learn about the company as a fraternal organization and its larger role in the community. In addition to fighting fires, Friendship members participated in parades and performed ceremonial duties for civic events. In the firehouse Meeting Room ceremonialartifacts such as helmets, capes and other regalia, are exhibited alongside the room’s original furniture.

Friendship Firehouse Museum is located at 107 South Alfred Street in Old Town, Alexandria. The site is open from 1:00 PM – 4:00 PM on Saturdays and Sundays; closed on major holidays. The museum is owned and operated by the City of Alexandria, and managed by the City’s Office of Historic Alexandria. Special programming is offered throughout the year.

Morning Links – News From Alexandria, the...

About This Weekend in Alexandria: October 2-4