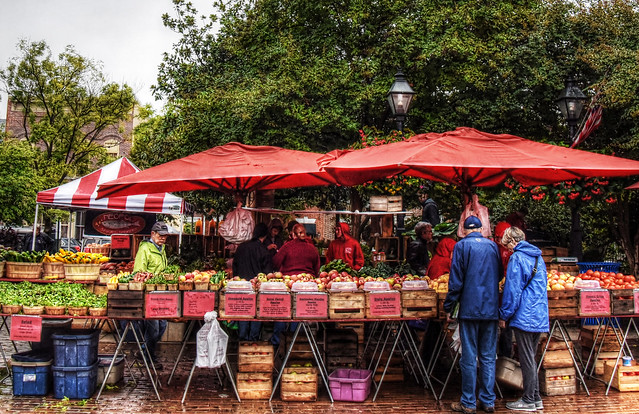 We scanned the local papers, blogs, and news websites for a Sunday news roundup of news, opinion, and links Alexandria, Virginia and around the area. Send tips and ideas to us at this link. Signup at this link to receive a daily email and get all of the latest news and events in one place from Red Brick Town – Alexandria, Virginia’s best neighborhood blog.

After 50 years in business, Chez Andrée is saying goodbye to Alexandria, Virginia.

More rain on the way in the coming week We’ve got quite the spread in conditions coming up the next few days, with a good chance of rain heading into midweek. (Capital Weather Gang)

Alexandria Times makes political endorsements The year 2015 will be remembered politically as one of anger and discontent with the status quo, both nationally and locally in Alexandria. (Alexandria Times)

Episcopal Senior earns national football recognition At the start of his freshman year of high school in his hometown of Framingham, Mass., Joe Goff was somewhat reluctant to play football even with the encouragement of his brother Donny, preferring hockey and sometimes going so far as to hide from football practice sessions. (Alexandria Times)

Sacre Bleu! Chez Andrée is closing in Alexandria For 50 years, Chez Andrée has been a fixture at the corner of E. Glebe Road and Commonwealth Avenue in Alexandria. Next weekend, either on Saturday night, Oct. 24, or after Sunday brunch on Oct. 25, the restaurant will close its doors. The restaurant and the land on which it sits has been sold. (Alexandria News)

Alexandria named one of the 10 ‘drunkest counties in Virginia Well, at least we were ranked higher than Arlington, Virginia (Red Brick Town)

The Alexandrian Hotel Featured in In Touch Weekly