Families and friends honored fallen heroes from Alexandria, Virginia on Monday, May 30th at the 14th Annual Memorial Day Ceremony at the Captain Rocky Versace Plaza and Vietnam Veterans.

A couple of hundred folks gathered to watch a flag raising, hear about Captain Versace’s life, sing a moving rendition of ‘God Bless America’, and hear a reading of the names of the sixty-seven Alexandrians who made the ultimate sacrifice during the Vietnam War.

We’ll have video from the event up on our YouTube channel later today.

The Captain Rocky Versace Plaza and Vietnam Veterans’ Memorial at the Mount Vernon Recreation Center is dedicated to Captain Rocky Versace and the 66 other men who made the ultimate sacrifice during the Vietnam War. The Memorial is an ongoing tribute, not just to the 67 listed on the benches, but to all Alexandrians who served in America’s longest war. The Versace Memorial was dedicated on July 6, 2002 and the Medal of Honor was posthumously presented to the Versace family at the White House two days later.

You can see more photos from the event at this link or on our Facebook page. You can read Captain Versace’s Medal of Honor citation at this link. 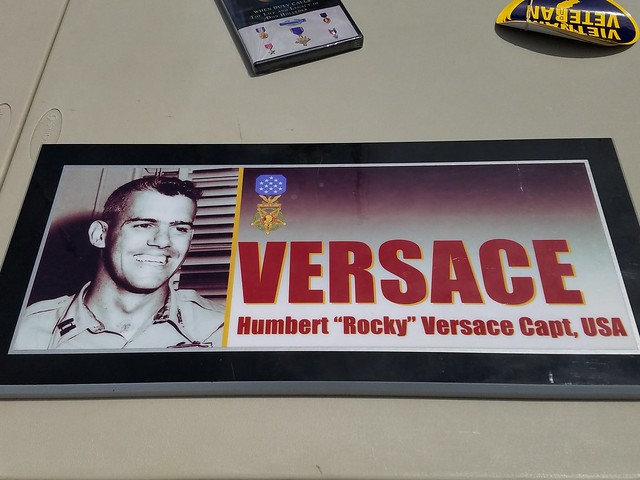 14 Things To Do This Weekend in Alexandria, Virginia