Here are some of our favorite photos from the RBT Media Flickr Pool, depicting the best of Alexandria, Virginia.

Check out these fantastic photos of 2015’s supermoon lunar eclipse (a.k.a. ‘Blood’ Moon) over Alexandria, Virginia (see above and below). Our fantastic Flickr Pool contributor Geoff Livingston snapped these great shots. Thank you for sharing Geoff!

On Sunday – Monday, we will again be able to witness a supermoon in combination with a lunar eclipse. The National Weather Service says Sunday skies should be partly cloudy and give way to mostly clear for great viewing on Monday evening.

The moon does not make its own light; it reflects light it receives from the sun. During a lunar eclipse, the moon appears less and less bright as sunlight is blocked by the Earth’s shadow. As totality approaches, sunlight reaches the moon indirectly and is refracted around the “edges” of Earth, through Earth’s atmosphere. Because of this, almost all colors except red are “filtered” out, and the eclipsed moon appears reddish or dark brown. This filtering is caused by particulates in our atmosphere; when there have been a lot of fires and/or volcanic eruptions, lunar eclipses will appear darker and redder. This eerie — but harmless — effect has earned the phenomenon the nickname “blood moon.” 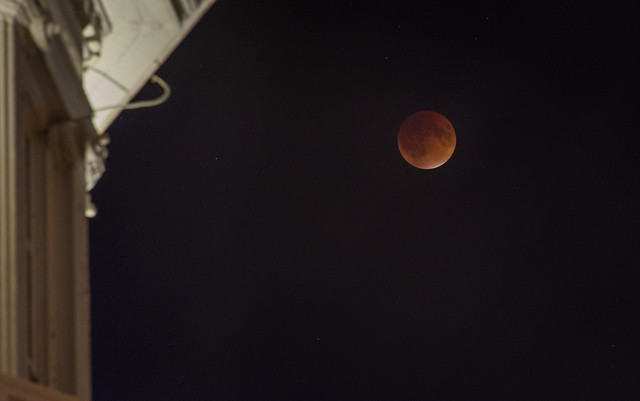 You can see other Flickr pool submissions we have posted about at this link. Consider contributing your photos today!

Tags:Alexandria Virginiablood moonSupermoontotal lunar eclipseWolf Moon
Share on FacebookShare on TwitterShare on PinterestShare on LinkedIn Share on TumblrShare on Email

The Beachcomber Restaurant in Alexandria #FlashbackFriday

A Look Back at Alexandria, Virginia Snowstorms #FlashbackFriday