by Lee Hernly, Editor
in Around Town
0

According to a new report by the Metropolitan Washington Council of Governments (COG), there are 9,794 persons experiencing homelessness in the region. This is the fewest number of people counted since the annual regional census—or Point in Time (PIT) count—began 18 years ago.

The report, Homelessness in Metropolitan Washington, is a one-day snapshot of the region’s residents experiencing homelessness and contains data from nine area jurisdictions.

The region’s number of persons experiencing homelessness decreased by seven percent (or 686 people) from 2018.

“The region should celebrate the achievements made to reduce homelessness in our communities over the past year, as well as over the past two decades,” said Tony Turnage, Prince William County Homeless Services Division Chief and COG Homeless Services Committee Co-Chair. “This measurable progress is the result of jurisdictions’ dedication to prioritizing permanent housing and wrap around services, ensuring homelessness is brief, rare, and non-recurring.”

Progress at the Local Level

Seven of the nine participating metropolitan Washington jurisdictions recorded decreases in the number of persons experiencing homelessness from 2018 to 2019. 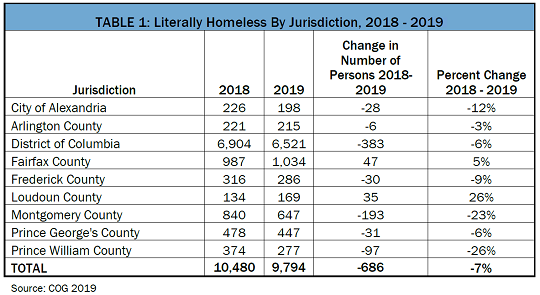 The longer-term trend is also positive, with the region recording a 16 percent decline, or 1,829 fewer people, experiencing homelessness over the last five years. 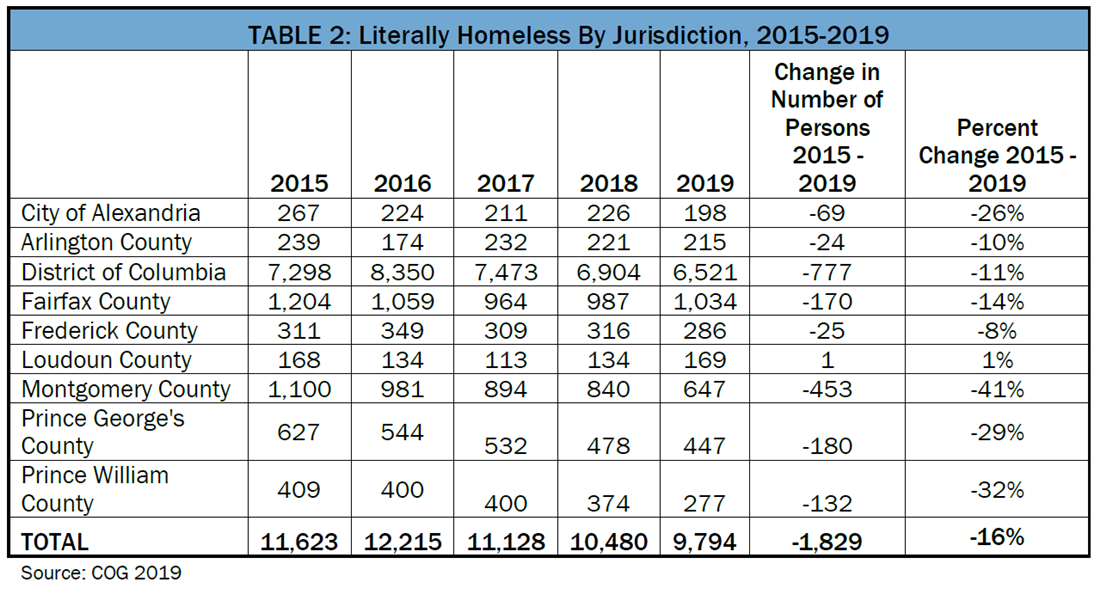 The PIT report provides extensive data on families and many subpopulations. For example, for the third year in a row, the number of families experiencing homelessness decreased, down 12 percent from 2018, bringing the regional total of homeless families to 1,242. Children represent a quarter of the region’s total homeless population (2,456), a slight decrease from the year prior. Additionally, for the second year, data was analyzed on the growing number of senior citizens facing a housing crisis or seeking emergency shelter in the region—886 people, including 150 unsheltered persons on the night of the count. The two oldest seniors experiencing homelessness were 85 years old.

“The Point in Time count and report help us better understand how to meet the needs of our residents,” said Kim Ball, Montgomery County Department of Health and Human Services Homeless Services Administrator and COG Homeless Services Committee Co-Chair. “We also hope that we raise awareness about the importance of creating and preserving affordable housing opportunities for the lowest-income individuals and families in our region. That piece is critical.”

Metropolitan Washington faces significant challenges in its efforts to end homelessness, including high rents, wages that aren’t keeping pace with housing costs, and an insufficient supply of permanently affordable housing.

According to the report, “several local jurisdictions and service providers are concerned many of the region’s residents are at risk of experiencing homelessness,” with many households doubled up or living in overcrowded situations.

The report calls on jurisdictions to continue efforts to reach out, assess, and house unsheltered homeless persons, increase permanent supportive housing, rapid rehousing, and other permanent housing inventory, and provide training opportunities to low-skilled and low-wage workers. Affordable housing for all income levels must also be available across the region—a priority for the COG Board of Directors—to realistically reduce and eliminate homelessness.

Much Ado in Alexandria Over a Chicken Slaughterhouse

Much Ado in Alexandria Over a Chicken Slaughterhouse

Listing We Love: This Home for Sale in Lynhaven

Virginia ABC Liquor Store Next to a School in Alexandria?

What’s with all the Closings in Old Town Alexandria? (Open Thread)